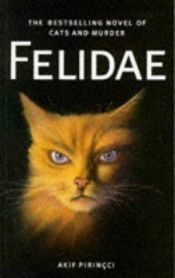 Felidae is a 1989 novel by the German-Turkish writer Akif Pirinçci. The main character is a cat named Francis who investigates the murders of several cats in a big city in Germany. As of 2012, there are eight books in the Felidae series: Felidae, Felidae II, Cave Canem, Das Duell, Salve Roma!, Schandtat, Felipolis and Göttergleich, of which only the first two have been translated into English. The author has published the first two Felidae novels in English as Amazon Kindle e-books.
Although being primarily a work of crime fiction, the Felidae series discuss many contemporary ethical problems and philosophical questions, such as the relationship between mankind and animals and the idea of superior races within species. Thus, the Felidae series can be considered more complex and multi-layered than many contemporary crime novels.

A Venetian Reckoning (= Death and Judgment)