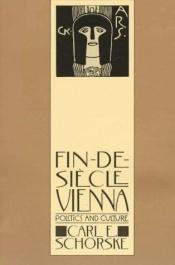 Fin-de-siècle Vienna: Politics and Culture, written by American cultural historian Carl E. Schorske and published by Knopf in 1980, won the 1981 Pulitzer Prize for General Non-Fiction. It has been described as a magnificent revelation of turn-of-the-century Vienna where out of a crisis of political and social disintegration so much of modern art and thought was born.
Partly reconstructed from Schorske's articles in the American Historical Review, the book is structured as seven themed but interlocking chapters considering the interrelationships between key artists with the development of psychoanalysis and what was, at the time, seen as an 'end of history'.
The book is lavishly illustrated with both colour and black-and-white reproductions of key artworks, helpfully referenced from the text which explains their relevance to the themes in question.
In the 'Introduction' the author claims that the text was born from his desire 'to construct a course in European intellectual history, designed to help students to understand the large, architectonic correlations between high culture and socio-political change'.

The Star of Kazan