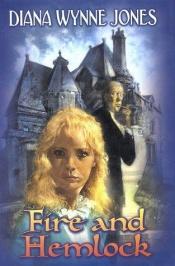 Fire and Hemlock is a modern fantasy by British author Diana Wynne Jones based largely on the Scottish ballads "Tam Lin" and "Thomas the Rhymer."
It was first published in 1984 in the United States by Greenwillow Books then in 1985 in Great Britain by Methuen Children's Books It has been republished several times since then in paperback, by various publishers. In-print versions are published by Collins in Britain and by HarperTeen in the United States, both divisions of HarperCollins. Firebird, an imprint of Penguin Group, released a new paperback edition on 12 April 2012.
Fire and Hemlock was a Phoenix Award Honor Book in 2005.

Across the Nightingale Floor

The Third Day, the Frost