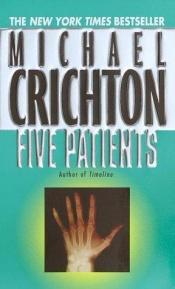 Five Patients is a non-fiction book by Michael Crichton that recounts his experiences of hospital practices during the late 1960s at Massachusetts General Hospital in Boston.
The book describes each of five patients through their hospital experience and the context of their treatment. The author notes in the foreword of the 1994 reprint of this book that medical practices have changed significantly since the book was written, but that the text was left as is to give us a more complete glimpse into the past.
The five patients were Ralph Orlando, a construction worker seriously injured in a scaffold collapse, John O'Connor, a middle aged dispatcher suffering from fever that has reduced him to a delirious wreck, Peter Luchesi, a young man who severs his hand in an accident, Sylvia Thompson, an airline passenger who suffers chest pains, and Edith Murphy, a mother of three who is diagnosed with a life-threatening disease.
Crichton recounts a brief history of medicine until 1969 to help contextualize hospital culture and practice, and mentions national healthcare, drug prices, healthcare costs, and healthcare politics.

Complications: A Surgeon's Notes on an Imperfect Sc …

Anatomy of an Illness as Perceived by the Patient