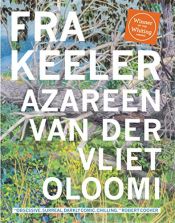 Fiction. A man purchases a house, the house of Fra Keeler, moves in, and begins investigating the circumstances of the latter's death. Yet the investigation quickly turns inward, and the reality it seeks to unravel seems only to grow more strange, as the narrator pursues not leads but lines of thought, most often to hideous conclusions.

"Obsessive/delightful, FRA KEELER subtly elaborates on life's details, its ordinary lunacies. Azareen Van der Vliet Oloomi's observations are droll and often hilarious. Her novel's incidents pile up and on, tilting and shifting under the weight of language's bizarre disturbances. FRA KEELER is wonderfully imaginative, the work of a terrific young writer."—Lynne Tillman

"Azareen Van der Vliet Oloomi is the descendent of writers as brilliant and disparate as Max Frisch, Alain Robbe-Grillet and Per Petterson. FRA KEELER is a compelling and humorously associative meditation on how 'one lives against one's dying,' and how that living will be in contra-distinction to all that explains that death on paper after its fact. Would that more book groups read books of this complexity and intelligence; discussion would reach on into the wee hours!"—Michelle Latiolais

"In FRA KEELER a mind churns on itself, while reality—if it is reality—comes rushing at it with a strange stutter, everything a bit lost, a bit off, and ready to be ground up further by the uncertain perception of the narrator. This is a book by turns funny and strange, but always entertaining."—Brian Evenson