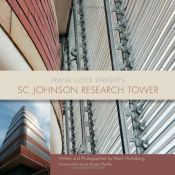 Frank Lloyd Wright's SC Johnson Research Tower in Racine, Wisconsin, is one of modern architecture's most significant landmarks. Completed in 1950, the fifteen-story skyscraper is the only existing example of Wright's ambitious taproot design. Like limbs from a tree trunk, alternating square floors and round mezzanines branch out from the weight-bearing central core—a truly revolutionary idea at the time and an engineering marvel today.

In 1943 H. F. Johnson Jr., president of the SC Johnson & Son Company, commissioned Wright (1867-1959) to create a new laboratory space that would be as innovative as the research and development team working inside it. The architect eagerly accepted the challenge, envisioning a vertical complement to the firm's streamlined Administration Building, designed by Wright seven years prior. The result was a new kind of skyscraper, one with double-height spaces, windows made of Pyrex glass tubing, and stripes of Wright's signature Cherokee red brick, all balanced on a small pedestal base—the Tower's sinewy core. Although the Tower opened to great acclaim in 1950, it closed just thirty-one years later. Despite its ingenious structure, the building ultimately proved to be an impractical model of urban-industrial architecture.

Confessions of an art addict

The Architecture of the City

The elements of style : an [sic] practical encyclop …

Artificial Light: A Narrative Inquiry into the Natu …

Paintings in the Vatican