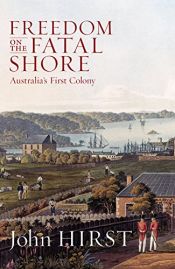 Freedom on the Fatal Shore brings together John Hirst's two books on the early history of New South Wales. Both are classic accounts which have had a profound effect on the understanding of our history. This combined edition includes a new foreword by the author.

Convicts with their "own time", convicts with legal rights, convicts making money, convicts getting drunk - what sort of prison was this? Hirst describes how the convict colony actually worked and how Australian democracy came into being, despite the opposition of the most powerful. He writes: "This was not a society that had to become free; its freedoms were well established from the earliest times."

“Colonial Australia was a more ‘normal’ place than one might imagine from the folkloric picture of society governed by the lash and the triangle, composed of groaning white slaves tyrannised by ruthless masters. The book that best conveys this and has rightly become a landmark in recent studies of the System is J.B. Hirst’s Convict Society and Its Enemies.” —Robert Hughes, The Fatal Shore

“Anyone with an interest in Australian political culture will find The Strange Birth of Colonial Democracy invaluable.” —Professor Colin Hughes, former Electoral Commissioner for the Commonwealth

John Hirst was a member of the History Department at La Trobe University from 1968 to 2007. He has written many books on Australian history, including Convict Society and Its Enemies, The Strange Birth of Colonial Democracy, The Sentimental Nation, Sense and Nonsense in Australian History and The Shortest History of Europe.

Helmet for My Pillow: From Parris Island to the Pac …

Paradise Reforged : a history of the New Zealanders …

Badground. Inside the Beaconsfield Mine Rescue. The …

Jack the Ripper: Letters from Hell

Under the influence : a history of alcohol in Austr …