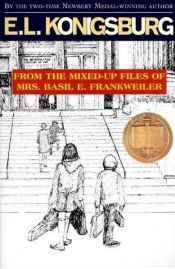 From the Mixed-Up Files of Mrs. Basil E. Frankweiler

From the Mixed-Up Files of Mrs. Basil E. Frankweiler is a novel by E. L. Konigsburg. It was published by Atheneum in 1967, the second book published from two manuscripts the new writer had submitted to editor Jean E. Karl.
Mixed-Up Files won the annual Newbery Medal for excellence in American children's literature in 1968, and her first-published book Jennifer, Hecate, Macbeth, William McKinley, and Me, Elizabeth won a Newbery Honor in the same year, the only double honor in Newbery history. Anita Silvey covered Mixed‑Up Files as one of the 100 Best Books for Children in 2005. Based on a 2007 online poll, the National Education Association named the book one of its "Teachers' Top 100 Books for Children". It was one of the "Top 100 Chapter Books" of all time in a 2012 poll by the School Library Journal.