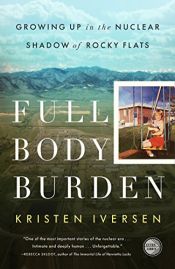 Full Body Burden: Growing Up in the Nuclear Shadow of Rocky Flats

Full Body Burden is Kristen Iversen's story of growing up in a small Colorado town close to Rocky Flats, a secret nuclear weapons plant. It's also a book about the destructive power of secrets—both family secrets and government secrets. Her father's hidden liquor bottles, the strange cancers in children in the neighborhood, the truth about what they made at Rocky Flats—best not to inquire too deeply into any of it. But as Iversen grew older, she began to ask questions and discovered some disturbing realities.
As this memoir unfolds, it reveals itself as a brilliant work of investigative journalism—a shocking account of the government's sustained attempt to conceal the effects of the toxic and radioactive waste released by Rocky Flats, and of local residents' vain attempts to seek justice in court. Based on extensive interviews, FBI and EPA documents, and class-action testimony, this taut, beautifully written book promises to have a very long half-life.

Now with Extra Libris material, including a reader’s guide and bonus content

The Golden Spruce: A True Story of Myth, Madness, a …

Gaviotas: A Village to Reinvent the World

Lost Mountain: A Year in the Vanishing Wilderness R …