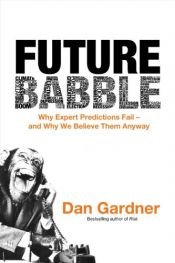 Future Babble: Why Expert Predictions Fail - and Why We Believe Them Anyway

In 2008, as the price of oil surged above $140 a barrel, experts said it would soon hit $200; a few months later it plunged to $30. In 1967, they said the USSR would have one of the fastest-growing economies in the year 2000; in 2000, the USSR did not exist. In 1911, it was pronounced that there would be no more wars in Europe; we all know how that turned out. Face it, experts are about as accurate as dart-throwing monkeys. And yet every day we ask them to predict the future — everything from the weather to the likelihood of a catastrophic terrorist attack. Future Babble is the first book to examine this phenomenon, showing why our brains yearn for certainty about the future, why we are attracted to those who predict it confidently, and why it’s so easy for us to ignore the trail of outrageously wrong forecasts.

In this fast-paced, example-packed, sometimes darkly hilarious book, journalist Dan Gardner shows how seminal research by UC Berkeley professor Philip Tetlock proved that pundits who are more famous are less accurate — and the average expert is no more accurate than a flipped coin. Gardner also draws on current research in cognitive psychology, political science, and behavioral economics to discover something quite reassuring: The future is always uncertain, but the end is not always near.

Bozo Sapiens: Why to Err is Human

Into the Silent Land: Travels in Neuropsychology

Reading in the Brain: The Science and Evolution of …

The better angels of our nature : why violence has …

The Overflowing Brain: Information Overload and the …