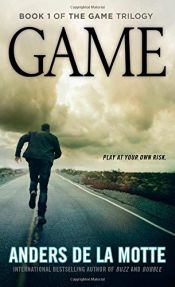 “A taut thriller that will leave the reader excited for the next book in the series” (Kirkus Reviews)—the first novel in a groundbreaking international thriller trilogy about a deadly game that blurs the line between reality and fiction.

One Sunday morning after a long night of partying, Henrik “HP” Pettersson, a slacker with a lot of ego and very little impulse control, finds a cell phone of an unfamiliar make on a commuter train. Through insisting and slightly unnerving messages that refer to him by name, the phone invites him to play a game. HP accepts without hesitation.

The rules are that HP must complete tasks that range from childish pranks to criminal acts, as allocated by the mysterious Game Master. The Game starts out innocently enough and then becomes increasingly risky, threatening the safety of someone close to HP. He is determined to become a superstar, but when the dark and tragic secrets of his family’s past are at stake, HP must make a choice. Will he suffer the humiliation of defeat, or will the need to win push him to the limit—no matter the cost?

The first novel in a fast-paced and riveting trilogy, Game will leave you guessing. Follow the rules, and everybody gets hurt…