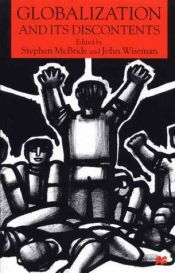 Globalization and Its Discontents is a book published in 2002 by the 2001 Nobel laureate Joseph E. Stiglitz.
The book draws on Stiglitz's personal experience as chairman of the Council of Economic Advisers under Bill Clinton from 1993 and chief economist at the World Bank from 1997. During this period Stiglitz became disillusioned with the IMF and other international institutions, which he came to believe acted against the interests of impoverished developing countries. Stiglitz argues that the policies pursued by the IMF are based on neoliberal assumptions that are fundamentally unsound:
Behind the free market ideology there is a model, often attributed to Adam Smith, which argues that market forces—the profit motive—drive the economy to efficient outcomes as if by an invisible hand. One of the great achievements of modern economics is to show the sense in which, and the conditions under which, Smith's conclusion is correct. It turns out that these conditions are highly restrictive.

The Lexus and the Olive Tree: Understanding Globali …

The Black Swan: The Impact of the Highly Improbable