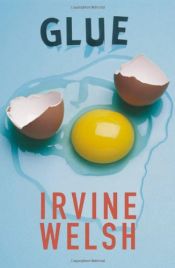 Glue is a 2001 novel by Scottish writer Irvine Welsh. Glue tells the stories of four Scottish boys over four decades, through the use of different perspectives and different voices. It addresses sex, drugs, violence, and other social issues in Scotland, mapping “the furious energies of working-class masculinity in the late 20th century, using a compulsive mixture of Lothians dialect, libertarian socialist theory, and an irresistible black humour.” The title refers not to solvent abuse, but the metaphorical glue holding the four friends together through changing times.
The four main characters are Terry Lawson, Billy Birrell, Andrew Galloway, Carl Ewart. We first meet them as small children in 1970, then as teenagers around 1980, as young men around 1990, and as men in their late thirties around 2000. The novel is split into five different sections.

The Bedroom Secrets of the Master Chefs