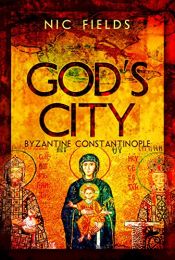 Byzantium. Was it Greek or Roman, familiar or hybrid, barbaric or civilized, Oriental or Western? In the late eleventh century Constantinople was the largest and wealthiest city in Christendom, the seat of the Byzantine emperor, Christ’s vice-regent on earth, and the center of a predominately Christian empire, steeped in Greek cultural and artistic influences, yet founded and maintained by a Roman legal and administrative system. Despite the amalgam of Greek and Roman influences, however, its language and culture was definitely Greek. Constantinople truly was the capital of the Roman empire in the East, and from its founding under the first Constantinus to its fall under the eleventh and last Constantinus the inhabitants always called themselves Romaioi, Romans, not Hellênikés, Greeks. Over its millennium long history the empire and its capital experienced many vicissitudes that included several periods of waxing and waning and more than one ‘golden age’.

Its political will to survive is still eloquently proclaimed in the monumental double land walls of Constantinople, the greatest city fortifications ever built, on which the forces of ‘barbarism’ dashed themselves for a thousand years. Indeed, Byzantium was one of the longest lasting social organizations in history. Very much part of this success story was the legendary Varangian Guard, the élite body of axe-bearing Northmen sworn to remain loyal to the true Christian emperor of the Romans. There was no hope for an empire that had lost the will to prosecute the grand and awful business of adventure. The Byzantine empire was certainly not of that stamp.

Envy of the Gods: Alexander the Great's Ill-Fated J …

SPQR: A History of Ancient Rome

Progress Into the Past: the Rediscovery of the Myce …

Warfare and agriculture in classical Greece