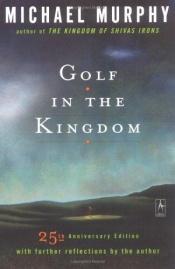 Golf in the Kingdom

Golf in the Kingdom is a 1971 novel by Michael Murphy. It has sold over a million copies and been translated into 19 languages. Golf in the Kingdom tells the story of Michael Murphy, a young traveler who accidentally stumbles on a mystical golfing expert while in Scotland.
Murphy was inspired to write the book after his time at the Sri Aurobindo Ashram. He became interested in the similarities between descriptions of successful athletes and people who said they had achieved the state of Zen. The novel spawned the Shivas Irons Society, an organization whose members combine golf and meditation. In 1997, Murphy wrote a sequel, The Kingdom of Shivas Irons.
Golf in the Kingdom is referenced in the fifth episode of season one of the television series Franklin & Bash.

The Legend of Bagger Vance: A Novel of Golf and the …

How Soccer Explains the World

Wait Till Next Year

The Downhill Lie: A Hacker's Return to a Ruinous Sp …

The Last Night of the Yankee Dynasty

The Blind Side: Evolution of a Game