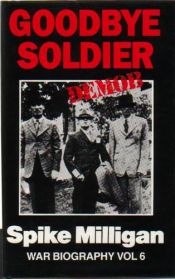 Spike Milligan's sixth volume of autobiography is Goodbye Soldier. World War II has ended, Milligan continues NAAFI performances. During this time in Italy and Austria he tours with a large group as one of The Bill Hall Trio. While music and war were backdrops for the first books, music and his relationship with Toni Fontana are here. The book covers June to September 1946, at which point Milligan is released from service and sails home for England. The text is a fifth shorter than the longest volume Mussolini: His Part in My Downfall. The jokes are sometimes sparse.
Unlike the people he occasionally performed with during the war, with whom Milligan later worked or who otherwise became notable, Milligan spends a page suggesting the NAAFI tour group were “bloody awful”, and that “...none of them were ever heard of again”. But he says of Bill Hall:
”God, what a strange man, but a genius of a musician. When he died a few years ago, I realized that a genius could die unsung.”
Italian ballerina Toni Fontana, a member of the group, is Milligan’s almost exclusive love interest. Milligan’s Italian is weak, her English is better, but not always up to Milligan’s verbal horseplay.

A Girl from Yamhill: A Memoir

The opposite of fate

The Shark Net: Memories and Murder