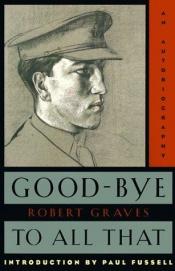 Goodbye to All That

Good-Bye to All That, an autobiography by Robert Graves, first appeared in 1929, when the author was thirty-four. "It was my bitter leave-taking of England," he wrote in a prologue to the revised second edition of 1957, "where I had recently broken a good many conventions". The title may also point to the passing of an old order following the cataclysm of the First World War; the inadequacies of patriotism, the rise of atheism, feminism, socialism and pacifism, the changes to traditional married life, and not least the emergence of new styles of literary expression, are all treated in the work, bearing as they did directly on Graves' life. The unsentimental and frequently comic treatment of the banalities and intensities of the life of a British army officer in the First World War gave Graves fame, notoriety and financial security, but the book's subject is also his family history, childhood, schooling and, immediately following the war, early married life; all phases bearing witness to the "particular mode of living and thinking" that constitute a poetic sensibility.
Laura Riding, Graves' lover, is credited with being a "spiritual and intellectual midwife" to the work.