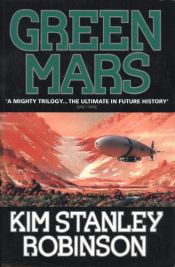 In the Nebula Award winning Red Mars, Kim Stanley Robinson began his critically acclaimed epic saga of the colonization of Mars, Now the Hugo Award winning Green Mars continues the thrilling and timeless tale of humanity's struggle to survive at its farthest frontier.
Nearly a generation has passed since the first pioneers landed, but the transformation of Mars to an Earthlike planet has just begun The plan is opposed by those determined to preserve the planets hostile, barren beauty. Led by rebels like Peter Clayborne, these young people are the first generation of children born on Mars. They will be joined by original settlers Maya Toitovna, Simon Frasier, and Sax Russell. Against this cosmic backdrop, passions, rivalries, and friendships explode in a story as spectacular as the planet itself.
Red Mars garnered a Hugo nomination and rave reviews across the country with its sweeping story of Martian colonization. Packed with scientific detail, compelling characters, and a thrilling story of humankind living at its newest frontier, this second volume in the epic promises to become a classic.

The Guns of Avalon

The Hand of Oberon

The Sailor on the Seas of Fate

A Day For Damnation (The War Against the Chtorr, Bo …