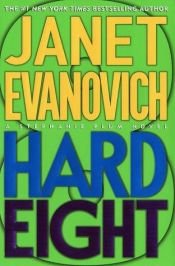 Hard Eight is the eighth novel by Janet Evanovich featuring the bounty hunter Stephanie Plum. It was written in 2002.
This book is notable for the introduction of Albert Kloughn, an attorney and soon to be brother-in-law of Stephanie.
Stephanie, on a "break" from her relationship with Joe Morelli, has sex with Ranger.
Hard Eight revolves around a child custody bond, rather than a criminal bond, as a main plot, and marks the departure of the series from Stephanie chasing bad guys to Stephanie being stalked. Books nine through 12 all revolve around Stephanie having a stalker. This is a radical departure from the previous seven books.

The Cat Who Said Cheese