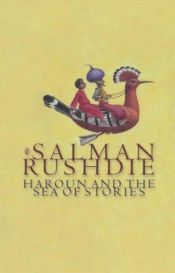 Haroun and the Sea of Stories is a 1990 children's book by Salman Rushdie. It was Rushdie's fifth novel after The Satanic Verses. It is a phantasmagorical story that begins in a city so old and ruinous that it has forgotten its name.
Haroun and the Sea of Stories is an allegory for several problems existing in society today, especially in the Indian subcontinent. It looks at these problems from the viewpoint of the young protagonist Haroun. Rushdie dedicated this book to his son, from whom he was separated for some time.
It was made into an audiobook read by Rushdie himself.