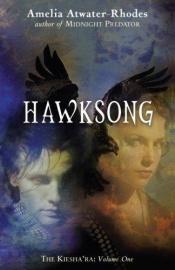 Hawksong is the first in a five book series of young adult fantasy shapeshifter novels called The Kiesha'ra Series. It was written by Amelia Atwater-Rhodes and published in 2003 when the author was 19. Hawksong is Atwater-Rhodes' most critically successful novel to date.
Narrated by Danica Shardae, heir to the Tuuli Thea. During this first book in the Keisha'ra series, Danica is 19. Danica's tentative marriage to Zane Cobriana ends the thousands of years of warring between their people. The title refers to a lullaby that Danica sings to Zane's younger brother Gregory at the beginning of the book, while the boy is dying on the battlefield.

Companions of the Night

The rose and the beast