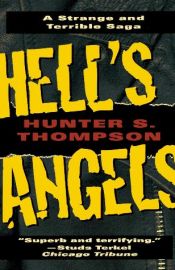 Hell's Angels: The Strange and Terrible Saga of the Outlaw Motorcycle Gangs

Hell's Angels: The Strange and Terrible Saga of the Outlaw Motorcycle Gangs is a book written by counterculture icon Hunter S. Thompson, first published in 1966 by Random House. It was widely lauded for its up-close and uncompromising look at the Hells Angels motorcycle club, during a time when the gang was highly feared and accused of numerous criminal activities. The New York Times described Thompson's portrayal as "a world most of us would never dare encounter."
It was Thompson's first published book and his first attempt at a nonfiction novel.