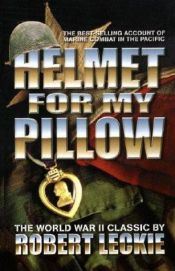 Helmet for My Pillow: From Parris Island to the Pacific, A Young Marine's Stirring Account of Combat in World War II

Helmet for My Pillow is the personal narrative written by World War II United States Marine Corps veteran, author and military historian Robert Leckie. First published in 1957, the story begins with Leckie enlisting in the United States Marines shortly after the 1941 Attack on Pearl Harbor.
The 2010 HBO mini-series The Pacific was adapted in large part from Helmet for My Pillow, along with Eugene Sledge's With the Old Breed: At Peleliu and Okinawa and the personal story of Medal of Honor recipient Gunnery Sergeant John Basilone.

Flags of Our Fathers

Flags of Our Fathers