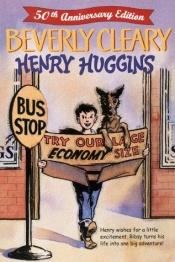 Henry Huggins is the first book in the Henry Huggins series of children's novels, written by Beverly Cleary. Henry is an ordinary boy who manages to get into funny scrapes with his dog Ribsy. First published in 1950, it was originally illustrated by Louis Darling.
This book was a response to a letter from a child saying, "Where are the books about the kids like us?" One critic called the character of "Henry" the "modern Tom Sawyer."
The character of Henry Huggins returned in later books and also in a play which was written by Beverly Cleary and Cynthia J. McGean.

The Mouse and the Motorcycle

Out of the Dust