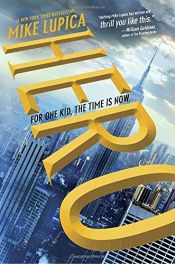 Fourteen-year-old Billy Harriman can feel the changes. The sharpening of his senses. The incredible strength. The speed, as though he can textmessage himself across miles. The confidence and the strange need to patrol Central Park at night. His dad had been a hero, a savior to America and a confidante of the president. Then he died, and the changes began in Billy. What Billy never knew was that his father was no ordinary man-he was a superhero, battling the world's evil. This is a battle that has been waged for generations and that knows no boundaries.

“[N]othing Mike Lupica has written will thrill you like this.” –William Goldman, author of The Princess Bride

“Sportswriter and novelist Lupica offers a change of pace from his previous sports stories for younger readers, deftly reworking the traditional superhero origin story into a moving tale of adolescent growth.” –Publisher’s Weekly

“[T]he stage is set for a sequel to what looks like a surefire hit.” –School Library Journal

Where the Mountain Meets the Moon