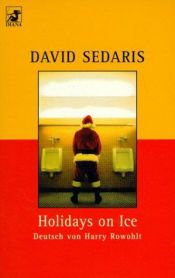 Holidays on Ice is a 1997 collection of essays about Christmas, some new and some previously published, by David Sedaris.
Sedaris is named by Time as America’s Favorite Humorist and was named by The Economist as one of the funniest writers alive. This is one of his first works, which when originally published, was re-released with additional new passages, most of which have been previously cited by other authors.
Some online fans have written that Sedaris' style of writing on this particular collection is precise, at times dark, and very funny.
The most popular essay is “Santaland Diaries”, which is Sedaris’ take on working as an elf at a department store grotto during Christmas season.
"Holidays on Ice" was re-released in October 2008 by publisher, Little, Brown & Company. The book has 176 pages.

The Grass Is Always Greener Over the Septic Tank

Boogers Are My Beat: More Lies, But Some Actual Jou …

Dave Barry is from Mars and Venus

Childhood Is Hell : A Cartoon Book