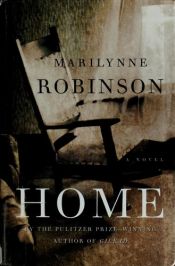 Home is a novel written by the Pulitzer Prize-winning American author Marilynne Robinson. Published in 2008, it is Robinson's third novel, preceded by Housekeeping in 1980 and Gilead in 2004.
The novel chronicles the life of the Boughton family, specifically the father, Reverend Robert Boughton, and Glory and Jack, two of Robert's adult children who return home to Gilead, Iowa. A companion to Gilead, Home is an independent novel that takes place concurrently.
The novel won one of the 2008 Los Angeles Times Book Prizes, the 2009 Orange Prize for Fiction and was a finalist for the 2008 National Book Award for Fiction.
Home was named one of the "100 Notable Books of 2008" by The New York Times, one of the "Best Books of 2008" by The Washington Post, one of the "Favorite Books 2008" of The Los Angeles Times, one of the "Best Books of 2008" of The San Francisco Chronicle, as well as one of The New Yorker book critic James Wood's ten favorite books of 2008.

A Gate at the Stairs