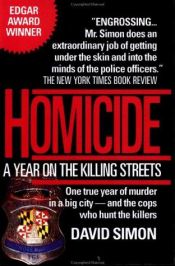 Homicide: A Year on the Killing Streets

Homicide: A Year on the Killing Streets is a 1991 book written by Baltimore Sun reporter David Simon describing a year spent with detectives from the Baltimore Police Department Homicide Unit. The book received the 1992 Edgar Award in the Best Fact Crime category.
The book was subsequently fictionalized as the NBC television drama Homicide: Life on the Street, on which Simon served as a writer and producer. Many of the key detectives and incidents portrayed in the book provided inspiration for the first two seasons of the show, with other elements surfacing in later seasons as well. It later also provided inspiration for the HBO television series The Wire.

The Corner: A Year in the Life of an Inner-City Nei …

Every breath you take

The A to Z Encyclopedia of Serial Killers