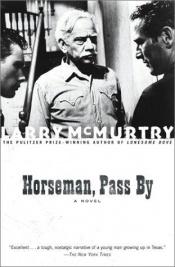 Horseman, Pass By, is the first novel written by Pulitzer Prize-winning author Larry McMurtry. The 1961 western portrays life on a cattle ranch from the perspective of young narrator Lonnie Bannon. Set in post-World War II Texas, the Bannon ranch is owned by Lonnie's venerable grandfather, Homer Bannon. Homer's ruthless stepson, Hud, stands as the primary antagonist of the novel. The novel inspired the film Hud starring Paul Newman as the title character.
The title of the novel derives from the last three lines of the poem, "Under Ben Bulben" by William Butler Yeats, and are carved on his tombstone:
"Cast a cold eye
On life, on death.
Horseman, pass by."

All I Need Is You (Stranton Family Book 2)

The treasure of the Sierra Madre

The day the cowboys quit