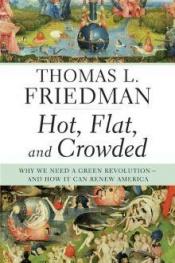 Hot, Flat, and Crowded: Why We Need a Green Revolution - and How It Can Renew America

Hot, Flat, and Crowded: Why We Need a Green Revolution—And How It Can Renew America is a book by New York Times Foreign Affairs columnist Thomas Friedman, proposing that the solutions to global warming and the best method to regain the United States' economic and political stature in the world is to embrace the clean energy and green technology industries. The title derives from the convergence of Hot, Flat and Crowded.
The book was released on September 8, 2008 by Farrar, Straus and Giroux. The audiobook was released simultaneously by Macmillan Audio. The cover art is taken from Hieronymus Bosch's The Garden of Earthly Delights.
Release 2.0 Updated and Expanded was published in November 2009.

The song of the dodo

Cool It: The Skeptical Environmentalist's Guide To …

An Inconvenient Truth: The Planetary Emergency of G …

Six Degrees: Our Future on a Hotter Planet (UK Pape …

The Persian Puzzle: The Conflict Between Iran and A …