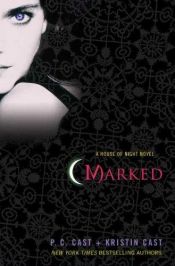 Marked is the first novel of the House of Night fantasy series written by P.C. Cast and Kristin Cast.
Young teenagers are selected to enter a four-year period transformation to a vampyre and marked with an the unfilled mark of a crescent moon. Those are sent to their local Houses of Night, private schools directed by vampyres, specialized in helping the adolescents, called fledglings, survive the Change.
Young fledgling Zoey is unusual: unlike other normal fledglings, she bears a filled mark, a sign that the goddess of vampyres, Nyx, has bestowed a great destiny onto her, but she also has to deal with normal highschool girl issues:school, boyfriends and the evil popular girl waiting just around the corner.
The book has been translated into more than 20 languages including French, Spanish, German and Chinese.

In the Forests of the Night

Kitty and the Dead Man's Hand