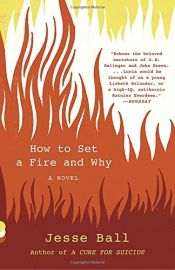 How to Set a Fire and Why: A Novel (Vintage Contemporaries)

“Ball has created a voice that echoes the beloved narrators of J. D. Salinger and John Green. . . . With her tragic past, brilliant mind and subversive potential, Lucia could be thought of as a young Lisbeth Salander, or a high-IQ, antiheroic Katniss Everdeen, but with a better sense of humor.” —Newsday

Lucia Stanton’s father is dead, her mother is in a mental hospital, and she’s recently been kicked out of school—again. Living with her aunt in a garage-turned-bedroom, and armed with only a book, a Zippo lighter, and a pocketful of stolen licorice, she spends her days riding the bus to visit her mom and following the only rule that makes any sense: Don’t do things you aren’t proud of.

When Lucia discovers that her school has a secret Arson Club, her life is suddenly lit up; she’ll do anything to join. Edgy, raw, and hilarious, How to Set a Fire and Why is a thrilling story about growing up the hard way.

The Sense of an Ending

The Lake of Dead Languages