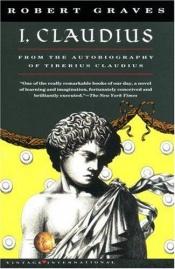 Graves's legendary tale of Claudius, a nobleman in the corrupt and cruel world of ancient Rome during the rule of Augustus, Tiberius and Caligula, is a truly compelling listening experience. Derek Jacobi returns to the role that defined his career when he starred in the 1976 Masterpiece Theatre miniseries I, Claudius. Jacobi is so strong in this role, it seems created especially for him. Jacobi's compelling voice demands his audience's undivided attention from start to finish and in doing so delivers an unforgettable performance as Claudius yet again. So incredibly personal is Jacobi's performance that listeners feel almost as if eavesdropping on someone's private life, which only draws us deeper into this gem of modern literature.

I, Claudius follows the life of the fourth Emperor of the Roman Empire, Tiberius Claudius Caesar Augustus Germanicus, prior to his awkward 'coronation'. Claudius himself is the perfect anti-hero; Yes, he is honest, sincere and wise but what allowed Claudius to get by was his sycophant, coward and at times self-demeaning and pathetic attitudes. This is a strong point of the book in my opinion; The characters psychological portrait isn't in black and white and linear; It's layered and shaded in gray. Even, the most evil characters in the book are given soft strokes of white. This humanizes the characters and makes the reading experience much more immersive and credible. One great feat of this book is that it maintains an epic feel throughout, eventhough it doesn't really focus on the croud-pleasing war and adventure themes. Instead it focus on family strife and political conflict, akin to a mafia themed novel (I'm just going to leave it at that). You get to learn and read about the transition of the Roman republic to the Roman empire and how to better interpret the transition; You get to learn a bit about the inner workings of the Roman political system, the Roman ambiguous mythological and superstitious ideals, and finally about the first emperors reign. In short, if you're still new to Roman history you get to learn alot, if you're an history buff you will probably revisit alot of accumulated knowledge but you will still take alot out of the book. Which this takes me to the narrative; The book is just beautifully written (Semantically, since I'm reading a translation) which is more amazing if you consider that Robert Graves wrote the book on a deadline strictly for financial needs. He even (brilliantly) circumvents narrative issues like making sure you are aware of the copious amount of characters (most of which share similar names) and of their relation to each other (Constant incest, makes it a tad hard to keep track) in a very clever, non condescending way. The book provides a defolding page with Claudius' family tree, which is a nice touch, but really doesn't enlighten you more as the family relations are just too complex. In terms of historical accuracy, it IS based on Claudius' autobiography and while I'm not knowledgeable enough to decide whether some anecdotes are fact or fiction the fact of the matter is that i really didn't feel the need to. It's just a fantastic work, one that leaves you nostalgic as soon as you turn to the back cover. Epic, instructive, fascinating, immersive, well-written, fun are the keywords for anyone looking to read this book.

A Gladiator Dies Only Once : The Further Investigat …

The Black Arrow: A Tale of the Two Roses