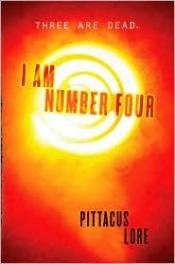 I Am Number Four

I Am Number Four is a young adult science fiction novel by Pittacus Lore and the first book in the Lorien Legacies series. The book was published by HarperCollins on August 3, 2010, and spent seven successive weeks at #1 on the children's chapter of The New York Times bestseller list.
DreamWorks Pictures bought the rights to the film in June 2009; it was released on February 18, 2011 and was the first DreamWorks movie to be distributed by Disney's Touchstone Pictures.
The novel is the first of a proposed seven-book series.

The Power of Six