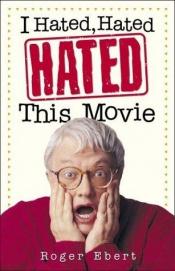 Roger Ebert awards at least two out of four stars to most of the more than 150 movies he reviews each year. But when the noted film critic does pan a movie, the result is a humorous, scathing critique far more entertaining than the movie itself.

I Hated, Hated, Hated This Movie is a collection of more than 200 of Ebert's most biting and entertaining reviews of films receiving a mere star or less from the only film critic to win the Pulitzer Prize. Ebert has no patience for these atrocious movies and minces no words in skewering the offenders.

Witness: Armageddon * (1998) --The movie is an assault on the eyes, the ears, the brain, common sense, and the human desire to be entertained. No matter what they're charging to get in, it's worth more to get out.

The Beverly Hillbillies* (1993)--Imagine the dumbest half-hour sitcom you've ever seen, spin it out to ninety-three minutes by making it even more thin and shallow, and you have this movie. It's appalling.

Police Academy no stars (1984)--It's so bad, maybe you should pool your money and draw straws and send one of the guys off to rent it so that in the future, whenever you think you're sitting through a bad comedy, he could shake his head, chuckle tolerantly, and explain that you don't know what bad is.

Dear God * (1996)--Dear God is the kind of movie where you walk out repeating the title, but not with a smile.

The movies reviewed within I Hated, Hated, Hated This Movie are motion pictures you'll want to distance yourself from, but Roger Ebert's creative and comical musings on those films make for a book no movie fan should miss.

James Bond: The Authorized Biography of 007

Firefly: The Official Companion Volume One