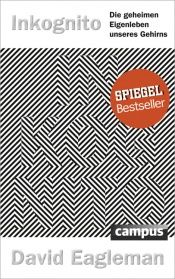 Incognito: The Secret Lives of the Brain

Incognito: The Secret Lives of the Brain is a New York Times bestselling non-fiction book by American neuroscientist David Eagleman, who directs the Laboratory for Perception and Action at Baylor College of Medicine.
"If the conscious mind-the part you consider to be you-is just the tip of the iceberg, what is the rest doing?" This is the main question throughout the entirety of the book.
In Incognito, Eagleman contends that most of the operations of the brain are inaccessible to awareness, such that the conscious mind "is like a stowaway on a transatlantic steam ship, taking credit for the journey without acknowledging the massive engineering underfoot."
Incognito remained on the New York Times bestsellers list from 2011 through 2012. It was named a Best Book of 2011 by Amazon, the Boston Globe, and the Houston Chronicle.
The book was reviewed as "appealing and persuasive" by the Wall Street Journal and "a shining example of lucid and easy-to-grasp science writing" by The Independent. A starred review from Kirkus described it as "a book that will leave you looking at yourself--and the world--differently."

The presence of the past

Treatise on the gods