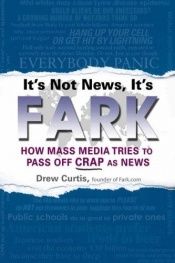 A hilarious exposé on the media gone awry, from the creator of the wildly popular Fark.com

Have you ever noticed certain patterns in the news you see and read each day? Perhaps it’s the blatant fear-mongering in the absence of facts on your local six o’clock news (“Tsunami could hit the Atlantic any day!” Everybody panic!), or the seasonal articles that appear year after year (“Roads will be crowded this holiday season.” Thanks, AAA.). It’s Not News, It’s Fark is Drew Curtis’s clever examination of the state of the media today and a hilarious look at the go-to stories mass media uses when there’s just not enough hard news to fill a newspaper or a news broadcast. Drew exposes eight stranger-than-fiction media patterns that prove just how little reporting is going on in the world of reporters today. It’s Not News, It’s Fark examines all the “news” that was never fit for print in the first place, and promises to have you laughing along the way.

The Idea Factory: Bell Labs and the Great Age of Am …