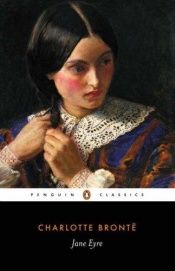 Jane Eyre by Charlotte Bronte, orphaned, penniless, victim to a harsh Aunt, and miserable years at Lowood institution finds love as Governess to the sickly Adele, illegitimate daughter of Mr Rocheste. With their wedding interrupted by the sudden intrusion of Rochester's mad Creole wife, inhabitant of the upper regions of Thornfield Hall for years, Jane flees. Nursed from near-death on the moors by the Revd St John Rivers and his 2 sisters, Jane learns both that they are her cousins and that she is the recipient of some money from her Uncle. On the verge of yielding to River's appeal that she marry him, Jane is prevented by a telepathic appeal from Rochester and returns to the Hall to find the building burned, his wife dead and Rochester blinded. Yet marriage seemsaid in the restoration of his sight.

Bunnicula: A Rabbit-Tale of Mystery