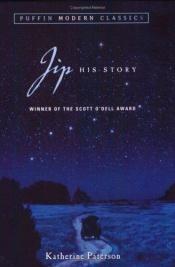 Jip, His Story is a 1996 children's book written by U.S. novelist Katherine Paterson. Set in Vermont during the 1850s, it focuses on a 12-year-old orphan named Jip, who was abandoned as an infant and mistaken for a gypsy because of his skin color. Jip works at a poor farm where mentally ill residents are housed. One of the residents, named Putnam Nelson, appears to be a lunatic, although Jip discovers he is actually very intelligent man with serious mental health problems. Jip also discovers that he is the part-black child of an escaped slave, and that he has been claimed as the property of a slave-owning farmer. Jip and Putnam Nelson escape together to the underground railroad.
Jip, His Story won the 1997 Scott O'Dell Award for Historical Fiction. In 2005, the book was turned into a musical by Danny Duncan and Emily Klion and performed at The Marsh. This adaptation won the 2008 American Harmony Prize.

The Witch of Blackbird Pond

Adam of the Road

Jacob Have I Loved

Bread and roses, too