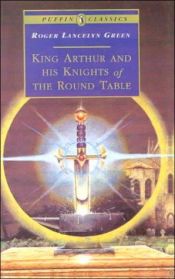 King Arthur and his Knights of the Round Table

King Arthur and His Knights of the Round Table is a novel for children written by Roger Lancelyn Green. It was first published by Puffin Books in 1953 and has been frequently reprinted. In 2008 it was reissued in the Puffin Classics series with an introduction by David Almond, and the original illustrations by Lotte Reiniger.
Green attempted to weave together the many legends surrounding King Arthur in a single narrative, claiming that Thomas Malory's version of the story, Le Morte d'Arthur, was a loose collection of separate stories. Green attempted to relate each legend so that the entire story would have a beginning, middle and end. Green used many sources in addition to Malory.

The Sword in the Stone