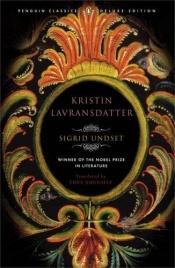 Kristin Lavransdatter is a trilogy of historical novels written by Nobel laureate Sigrid Undset. The individual novels are Kransen, first published in 1920, Husfrue, published in 1921, and Korset, published in 1922. Kransen and Husfrue were translated from the original Norwegian as The Bridal Wreath and The Mistress of Husaby, respectively, in the first English translation by Charles Archer and J. S. Scott.
This work formed the basis of Undset receiving the 1928 Nobel Prize in Literature, which was awarded to her "principally for her powerful descriptions of Northern life during the Middle Ages". Her work is much admired for its historical and ethnological accuracy.