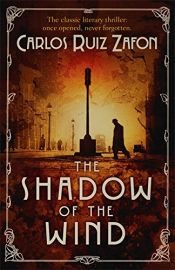 La sombra del viento (Traditional edition of 'The shadow of the wind', NOT in English)

Barcelona, 1945: A city slowly heals in the aftermath of the Spanish Civil War, and Daniel, an antiquarian book dealer’s son who mourns the loss of his mother, finds solace in a mysterious book entitled The Shadow of the Wind, by one Julián Carax. But when he sets out to find the author’s other works, he makes a shocking discovery: someone has been systematically destroying every copy of every book Carax has written. In fact, Daniel may have the last of Carax’s books in existence. Soon Daniel’s seemingly innocent quest opens a door into one of Barcelona’s darkest secrets--an epic story of murder, madness, and doomed love.

"Wonderous... masterful... The Shadow of the Wind is ultimately a love letter to literature, intended for readers as passionate about storytelling as its young hero." --Entertainment Weekly (Editor's Choice)

The Blood of Flowers