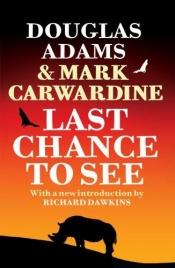 Last Chance to See is a 1989 BBC radio documentary series and its accompanying book, written and presented by Douglas Adams and Mark Carwardine. In the series, Adams and Carwardine travel to various locations in the hope of encountering species on the brink of extinction. The book was published in 1990.
In 2009, the BBC broadcast a television follow-up series of the same name, with Stephen Fry replacing the late Adams.

The Moon By Whale Light - And Other Adventures Amon …

The flight of the iguana

The Burgess animal book for children