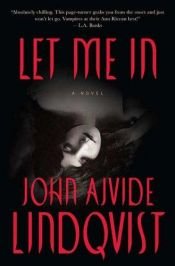 Let the Right One In is a 2004 vampire fiction novel by Swedish writer John Ajvide Lindqvist. The story centers on the relationship between a 12-year-old boy, Oskar, and a centuries-old vampire child, Eli. It takes place in Blackeberg, a working class suburb of Stockholm, in the early 1980s. The book focuses on the darker side of humanity, dealing with thematically heavy issues such as existential anxiety, social isolation, fatherlessness, divorce, alcoholism, school bullying, pedophilia, genital mutilation, self-mutilation, and murder.
The book was a bestseller in the author's home country of Sweden and was translated into several languages, including English. A Swedish-language film, Let the Right One In, directed by Tomas Alfredson, was released in 2008. An English-language film adaptation titled Let Me In, directed by Matt Reeves, was released in 2010. An English-language stage adaptation premiered in 2013.

A very gritty, involving novel. Gripping from the very start. I enjoy these sorts of books, where the reader knows a character's secrets before the hero/heroine does. An earthy story, accurately observing human nature, weakness, bullying, and fear.