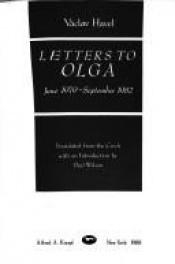 Letters to Olga is a book of compiled letters written by Czech playwright, dissident, and future president, Václav Havel to his wife Olga Havlová during his nearly four-year imprisonment from May 1979 to March 1983. Havel was imprisoned by the communist regime of then Czechoslovakia for being one of the leaders of The Committee for the Defense of the Unjustly Prosecuted - most of whom had been signatories of the human rights document Charter 77.
Author Salman Rushdie stated in a 1999 interview, that Letters to Olga was among a small handful of books that he carried with him everywhere he went during his years of hiding from possible execution.