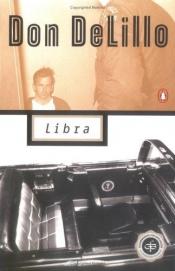 Libra is a novel written by Don DeLillo. It focuses on the life of Lee Harvey Oswald and offers a speculative account of the events that shaped the assassination of President John F. Kennedy.
The book takes the reader from Oswald's early days as a child, to his adolescent stint in the US Marine Corps, through his brief defection to the USSR and subsequent marriage to a Russian girl, and finally his return to the US and his role in the assassination of Kennedy.
In DeLillo's version of events, the assassination attempt on Kennedy is in fact intended to fail; the plot is instigated by disgruntled former CIA operatives who see it as the only way to guide the government to war on Cuba.
Oswald is portrayed as an odd outcast of a man, whose overtly communist political views cause him difficulties fitting into American society. He is not portrayed sympathetically, nor is he castigated; he is treated fairly in the novel, yet is not a character easy to attach to. He loves his wife, yet beats her; he dotes on his children yet he mistreats his mother. He is not shown to be a madman with absurd ideologies, but well-read and intelligent.