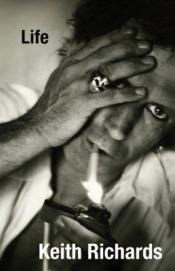 Life is a memoir by the Rolling Stones guitarist Keith Richards, written with the assistance of journalist James Fox. Published in October 2010, in hardback, audio and e-book formats, the book chronicles Richards' love of music, charting influences from his mother and maternal grandfather, through his discovery of blues music, the founding of the Rolling Stones, his often turbulent relationship with Mick Jagger, his involvement with drugs, and his relationships with women including Anita Pallenberg and his wife Patti Hansen. Richards also released Vintage Vinos, a compilation of his work with the X-Pensive Winos, at the same time.
It has been reported that publisher Little, Brown and Company paid an advance of $7.3 million, after seeing a ten-page extract. Co-writer James Fox interviewed Richards and his associates over a period of five years to produce the book. Life was generally well received by critics and topped The New York Times non-fiction list in the first week of release. Some controversy arose over comments Richards made about Mick Jagger, including references to his genitalia.

Life with My Sister Madonna