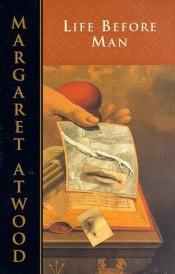 Life Before Man is a novel by Canadian writer Margaret Atwood. It was first published by McClelland and Stewart in 1979 and was a finalist for the Governor General's Award.
The novel has three principal characters: Nate, Elizabeth and Lesje. Nate and Elizabeth are an unhappily married couple, with both husband and wife involved in extramarital affairs. Lesje, pronounced 'Lashia,' is Nate's lover of Ukrainian ancestry and works along with his wife in the museum of natural history as a paleontologist fascinated by dinosaurs, giving the book its title. Elizabeth, said to have been inspired by Shirley Gibson, ex-wife of Atwood's partner Graeme Gibson, also takes a lover, Chris, who recently committed suicide. All three of the novel's main characters influence the narration, with each chapter presenting events from a particular character's perspective.