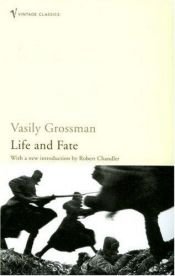 Life and Fate is a 1959 novel by Vasily Grossman and the author's magnum opus. Technically, it is the second half of the author's conceived two-part book under the same title. Although the first half, the novel For the Right Cause, written during the reign of Joseph Stalin and first published in 1952, expresses loyalty to the regime, Life and Fate sharply criticises Stalinism.
Vasily Grossman, a Ukrainian Jew, was a correspondent for the Soviet military paper Krasnaya Zvezda throughout World War II. He spent approximately 1,000 days on the frontlines, roughly three of the four years of the conflict between the Germans and Soviets. He was also author of the novel The People are Immortal. He was one of the first journalists to write about the ethnic cleansing of people in Eastern Europe and he was present at many famous battles. Life and Fate was his pièce de résistance and most defining achievement.