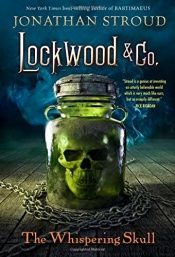 In the six months since Anthony, Lucy, and George survived a night in the most haunted house in England, Lockwood & Co. hasn't made much progress. Quill Kipps and his team of Fittes agents keep swooping in on Lockwood's investigations. Finally, in a fit of anger, Anthony challenges his rival to a contest: the next time the two agencies compete on a job, the losing side will have to admit defeat in the Times newspaper.

Things look up when a new client, Mr. Saunders, hires Lockwood & Co. to be present at the excavation of Edmund Bickerstaff, a Victorian doctor who reportedly tried to communicate with the dead. Saunders needs the coffin sealed with silver to prevent any supernatural trouble. All goes well-until George's curiosity attracts a horrible phantom.

Back home at Portland Row, Lockwood accuses George of making too many careless mistakes. Lucy is distracted by urgent whispers coming from the skull in the ghost jar. Then the team is summoned to DEPRAC headquarters. Kipps is there too, much to Lockwood's annoyance. Bickerstaff's coffin was raided and a strange glass object buried with the corpse has vanished. Inspector Barnes believes the relic to be highly dangerous, and he wants it found.

The author of the blockbuster Bartimaeus series delivers another amusing, chilling, and ingeniously plotted entry in the critically acclaimed Lockwood & Co. series.

Praise for The Screaming Staircase
"This story will keep you reading late into the night, but you'll want to leave the lights on. Stroud is a genius at inventing an utterly believable world which is very much like ours, but so creepily different. Put The Screaming Staircase on your 'need to read' list!" -Rick Riordan

"A pleasure from tip to tail, this is the book you hand the advanced readers that claim they'd rather read Paradise Lost than Harry Potter. Smart as a whip, funny, witty, and honestly frightening at times, Stroud lets loose and gives readers exactly what they want. Ghosts, kids on their own without adult supervision, and loads of delicious cookies." -Elizabeth Bird, School Library Journal

"Stroud shows his customary flair for blending deadpan humor with thrilling action, and the fiery interplay among the three agents of Lockwood & Co. invigorates the story (along with no shortage of creepy moments)." -Publishers Weekly
Praise for The Whispering Skull *"An occult portal and its spectral guardian nearly cut short the careers of three rising young ghost hunters in this madcap sequel to The Screaming Staircase (2013). For all their internecine squabbling, the three protagonists make a redoubtable team-and their supporting cast, led by the sneering titular skull in a jar, adds color and complications aplenty. Rousing adventures for young tomb robbers and delvers into realms better left to the dead."
-Kirkus Reviews (starred review) *"Stroud writes with a fine ear for dialog, a wry sense of humor, and a knack for describing haunted places. Creating tension that ebbs and flows, he slowly builds the dramatic narrative to a resounding crescendo, and he makes the quieter scenes that follow just as compelling." -Booklist (starred review)

The Wardstone Chronicles: The Spook's Tale

The Letter, the Witch, and the Ring (Lewis Barnavel …

The House with a Clock in Its Walls